OUR WINDOW TINTING PRODUCTS INCLUDE:

Sputtering technology is more complicated. Sputtering is also done in a vacuum chamber, but the metallizing is achieved at the atomic level. In brief, electromagnetic fields direct streams of ions from a chemically inert gas (usually argon) toward the metal. This ion bombardment, which is often described as “atomic billiards,” causes groups of atoms to dislodge in small bursts and scatter uniformly across the film. 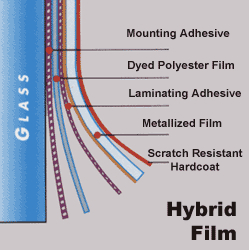 To further complicate the issue, many films contain both dyes and reflective metals. By combining dyes and metals, the negative effects of each can be reduced without sacrificing performance. A good example is gray dye and titanium coating. If used alone, dye would darken the film significantly, while the titanium would produce a highly mirrored surface. When paired, less of each can be used, resulting in a film that is relatively bright and non reflective.

This point is significant, if only because it quells the notion that the darkest films reject the most heat. In most cases, dark films are chosen because they offer greater privacy.

All film comes with a Manufacturer’s Warranty